Home » Infections » From bedside to patient: An Ebola survivor's odyssey 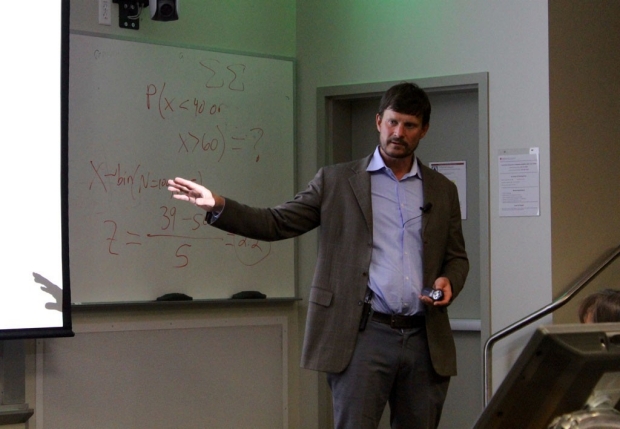 Ian Crozier, who was a physician volunteer in West Africa, recounts his story of surviving the Ebola virus, and the complications that ensued, during a talk Oct. 21 at Stanford.
Rachel Leslie

Ian Crozier, MD, is a walking laboratory for Ebola and a living testament to the damaging, long-term consequences of the disease, which are still very poorly understood.

As a volunteer physician with the World Health Organization in Sierra Leone, he worked furiously last fall to save patients in the heat of the Ebola crisis in West Africa. Then on Sept. 9, 2014, he became one of those patients himself and was airlifted to Emory University Hospital in Atlanta, where his vital organs rapidly began shutting down.

During an Oct. 21 appearance at Stanford, Crozier recounted his astonishing recovery, during which he rebounded from a torturous period of being hooked to a ventilator and a kidney dialysis machine, experiencing abnormal heart rhythms, and developing severe encephalopathy that left him delirious and then unconscious for weeks, ultimately suffering several hemorrhagic strokes.

“If I you had told me on day one that I would develop multisystem organ failure and asked me to predict my chances of survival, I would have said my chances were zero,” he told more than 100 faculty, students and staff in a standing-room only talk at the School of Medicine. “They [the Emory caregivers] really changed the game…. I really think they were walking on the moon, but in a different kind of space suit.”

He was among the sickest of patients to survive the disease and continues to suffer from a variety of disturbing consequences, including eye problems, hearing loss with tinnitus, short-term memory loss, seizures and sleep dysregulation, he said. He wryly cautioned his audience that he was approaching his “hour of narcolepsy” as he started his late- afternoon talk.

Crozier’s talk was sponsored by the Stanford Center for Innovation in Global Health, Stanford Immunology and the Stanford Medical Scientist Training Program.

It coincided with a plethora of recent news reports on the long-term consequences suffered by many Ebola survivors. The epidemic has killed more than 11,300 people and has not reached its end; in just the last few weeks, three new cases were reported.

In the Oct. 14 issue of the New England Journal of Medicine, a team of researchers found that male survivors of Ebola may carry a reservoir of the virus in their semen for as long as nine months. Another report in the same issue of the journal cited the first molecular evidence of a case of a Liberian woman who contracted Ebola through sexual transmission. 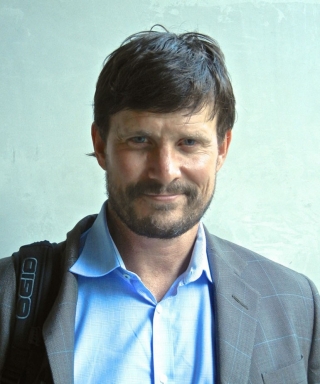 Moreover, earlier in October, a Scottish nurse who was declared cured of Ebola 10 months ago suffered a relapse and remains in “serious but stable” condition at the Royal Free Hospital in London, according to news reports.

“This virus is teaching us in this last tenth of this last mile, as it stutters along, that we have a lot to learn,” Crozier said. In the last 18 months, he said, clinicians in the field have begun to learn a lot more about the “survivor’s predicament.”

Crozier’s medical odyssey began Sept. 7, 2014, when he developed fever, headache and intense fatigue. He had come to Sierra Leone from Uganda, where he had been concentrating on developing the clinical skills of African doctors caring for HIV and tuberculosis patients at the Infectious Disease Institute in Kampala. He was among Sierra Leone’s early physician volunteers, working in the country’s only Ebola treatment unit where, at peak, the team helped care for overwhelming numbers of Ebola patients and those suspected of having it. He saw many patients and some colleagues die from the virus. Then, he suddenly found himself among the sick, on an air ambulance back to the United States. To this day, he does not know how he became infected.

At Emory, he developed severe diarrhea, losing 8 to 9 liters of fluids a day. His lungs began to fail, followed by his kidneys. He developed delirium, high fever and encephalopathy. He went through a prolonged period of unresponsiveness, with later MRI scans showing evidence that he suffered several large hemorrhagic strokes, he said.

“It must be odd to hear me talking about my own case … in what may seem a detached manner,” Crozier told the audience. “This was not theoretical. I’m standing here, and I’m alive, and yet I’ve described some of the worst disease we’ve seen with Ebola.”

It must be odd to hear me talking about my own case … in what may seem a detached manner.

Several indicators of fatal outcome in this and prior outbreaks were at play in his case. Relatively speaking, he was, at age 44, “old” to survive Ebola, had a very high blood viral load, and developed multisystem organ failure. He credits his survival in large part to the game-changing critical care and life support provided at his Emory bedside, as well as to eventual strong cellular immune responses that may have been sculpted by his particular genetic background. He also received some experimental treatment unavailable to patients in West Africa, including a plasma transfusion from an Ebola survivor — a British nurse who had been a colleague — as well as the experimental drug TKM-Ebola, though he said neither the presence of benefit nor the absence of harm from either could be clearly shown.

“I probably would have died in a week had I not been evacuated,” he said. “On one hand, I’m alive and incredibly grateful to the WHO, to the U.S. State Department and, of course, to a remarkable Emory team. At the same time, I’m alive and am haunted in some ways by the fact that so many of our patients, including some colleagues and friends, did not have access to the same care.”

As he began to rebound, Crozier had to relearn how to walk and talk again. He had lost 30 pounds on his 6-foot-5 frame, and during his talk showed a photo of himself bent over a walker. On Oct. 19, 2014, he was discharged from Emory.

Like other survivors, he had residual after effects, pain (including severe joint and muscle aches), as well as problems sleeping. Two or three weeks after discharge, he suddenly lost the hearing in his left ear, and has also developed a high-pitched ringing in his ears that persists today.

Two months after discharge, he developed left eye pain and blurred vision. Last December, his doctors at the Emory Eye Center sampled the fluid inside the eye and found billions of copies of the virus teeming there. “This was a shocking realization,” he said. His vision rapidly deteriorated and he lost pressure in the eye, which began to soften and lose its architecture. Within a few weeks, he went blind in the eye. “As I looked out at the world, all I could see was a dense obstruction, like a bramble hedge thicket. I couldn’t see what was right in front of me,” he said. One day, he woke up and found that his once-blue eye had turned green.

I walked out of the Emory unit as an Ebola survivor — quite remarkably — and I’m still trying to understand what enabled that walking out.

He was treated with steroids and an experimental oral antiviral (favipiravir), and then went home for New Year’s, convinced he was going blind in that eye. A few days later, he developed headache and fevers, and had to be readmitted to the Emory hospital. During this hospitalization, amid these fevers, he noticed that some of his vision had begun to return.

While his vision is not completely back to normal, much of it has returned. The eye is an area of the body, like the brain and the testes, that is “immune-privileged,” meaning the immune system is partially segregated from the eye and immune responses are essentially “dialed-down” in the ocular environment. He speculates that this immune privilege may have eventually collapsed, allowing his already-primed immune system to fight off the virus that had “hijacked” that privileged space. Determining what role the antiviral agent or the steroid injection played in the eye’s recovery is really impossible in a single patient’s case, he added.

Crozier said he still suffers from some neurologic complications, including short-term memory loss and some word-finding difficulty, particularly when his brain gets distracted by anxiety or fever, for example. Given how far he has come, “I have a new respect for the neuroplasticity of the brain,” he said. A few months ago, he experienced an epileptic seizure and is now taking an anti-epileptic medication.

He’s not yet officially back to work, but has been focusing on ways to evaluate and provide care to West African survivors, as well as engage the scientific questions emerging in his case and in those of many other survivors. He highlighted the urgent need to pay attention to the survivor’s predicament, which includes severe physical and emotional and psychological consequences, as well as a tragic stigma and social ostracism for many in West Africa.

“I walked out of the Emory unit as an Ebola survivor — quite remarkably — and I’m still trying to understand what enabled that walking out, and whether we can learn something from that that can be multiplied many times over at African bedsides,” Crozier said.